I finally bought that SDR receiver for shortwave listening, and was disappointed at the noise level and poor reception when using the supplied antenna. I then made a makeshift dipole out of speaker wire and laid it on the roof. Now that was a game-changer. There was much less noise and lots of broadcasts available from AM radio, Shortwave, Ham, FM Radio, etc.

After quickly tiring of Shortwave and other broadcasts, the Ham radio bands really seemed to stand out. It reminded me of the CB days as a kid. Back then though, Ham radio was considered the cool club to be in. Listening to the HF Ham bands on the SDR reminded me of what a great community existed on the radio spectrum. It was a place where perfect strangers immediately hit it off with conversations about their common interests, Hams traveling across the U.S. were invited to dinner by someone they first spoke to only 30 minutes earlier, and international barriers seemed non-existent.

Wanting better reception, I hoisted a 20M dipole up 20 feet in air with a properly grounded coax, and fed it into the office. Wow! That greatly reduced the noise level and brought the signals way up (yes, there’s an acronym for that). I regularly heard 20M transmissions from across the US, South America, and Europe. It was fascinating. Although listening in on these conversations was fun, I wanted to take it to the next level – and soon looked into licensing.

I located a group of VE’s near my home in eastern North Carolina and started studying. My academic, career, and hobbyist background was very electronics oriented. Based on the study questions and practice tests, It seemed the electronics part wouldn’t be a problem – even at the Amateur Extra level. Aside from that, there sure was a lot to learn!  After a few weeks of “Technician” level study, I decided to continue studying for all three exams.

Several months of hard studying later, I contacted Mark Gibson to arrange an exam in Wendell, NC. He was very patient with my ignorance of the process, and “texts”, asking questions prior to the exam date.

Technician Exam – I arrived at exam time and got settled in. All of the VE’s were very helpful and accommodating. I started the technician exam and found it to be fairly easy, but was unsure about some of the questions. I let the VE know it was done and he picked it up for grading. Several minutes later, he walked up to me and said “you only missed one question” and asked if I wanted to take the General exam. Surprised about the score, I said “sure”!

General Exam – This was of course more difficult, but seemed doable. There was more antenna theory, electronics, and memorized concepts/regulations. There were at least 7 questions I was unsure about. The VE’s seemed to take a long time grading it, which I thought was a bad sign. He finally came over and said “you only missed two questions”. Wow, great! “Would you like to take the Amateur Extra?” he asked. “Sure thing. Bring it on!”.

Amateur Extra Exam – Ok, this one was difficult. I had to lean heavily on the calculator, memorized impedance/resonance formulae, circuit/amp theory, as well as antenna theory/wavelengths, etc.  When done, I figured there may have been 10-15 missed questions, which pushed the result dangerously close to the pass/fail threshold. The 10 minute grading process seemed to take forever. Finally, the VE walked over with an unsettling stoic look and then said, “You sir, have pulled off a Trifecta. You were quite consistent and only missed 3 questions”. “What?”. I said, “are you pulling my leg?”. “No sir, congratulations”. He then shook my hand and said “we have some paperwork for you to sign!”. Well, that certainly was the perfect outcome – one that could have easily gone in the opposite direction.

Despite the apprehension during the scoring process, the overall result was one that I was frankly shooting for that day, and had studied hard to accomplish. That’s just how I do things. Really, one can do whatever they set their mind to.

The VE’s said a Trifecta was uncommon and asked to take a group picture, which of course I agreed to!  The overall experience was quite positive. The VE’s were friendly, laid back, and supportive of the examinees. It was a great experience. So much so that I asked Mark Gibson to be my first contact. Thanks again to the VE’s for their volunteer service. 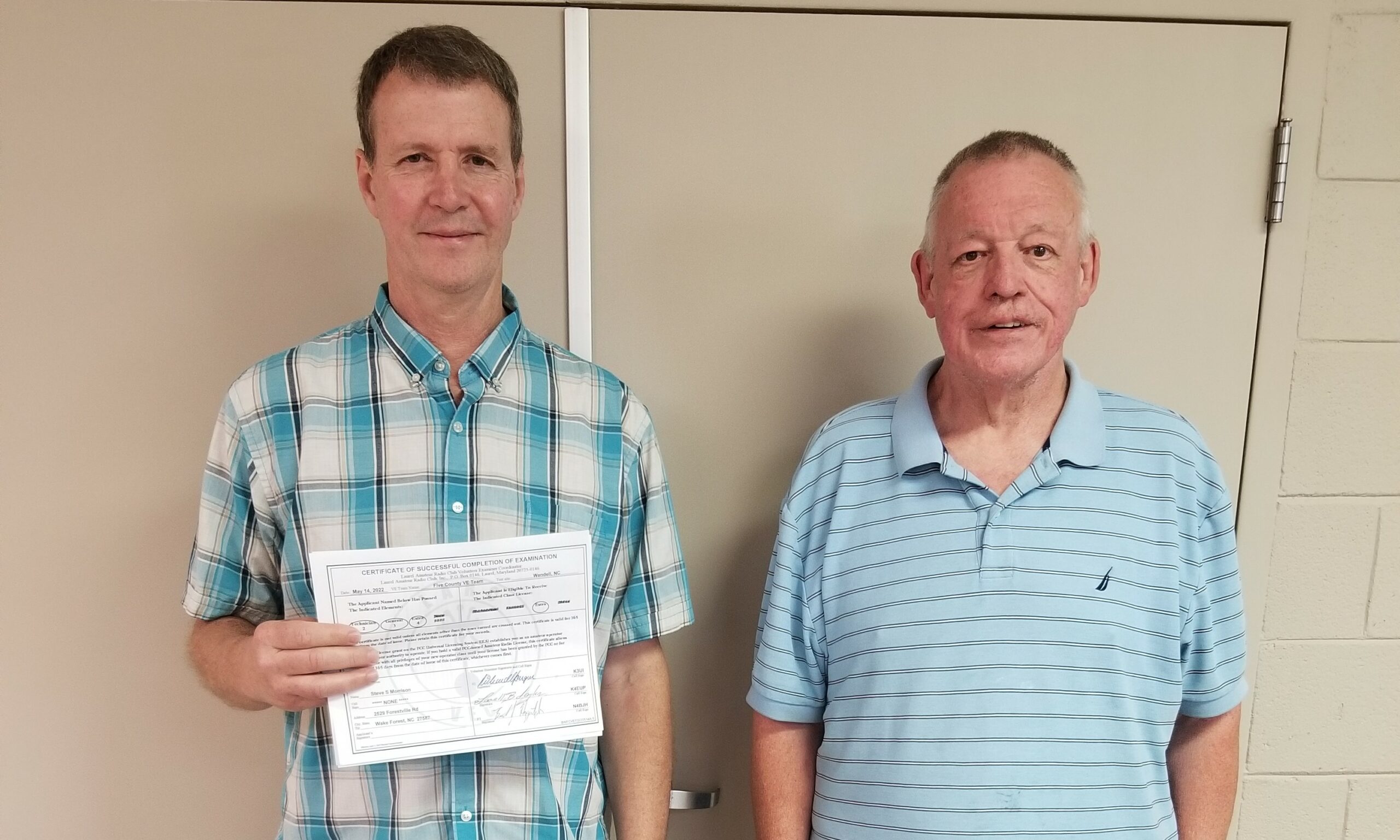 Please see the story from Our first trifecta

For the no charge exams near you see Laurel VEC